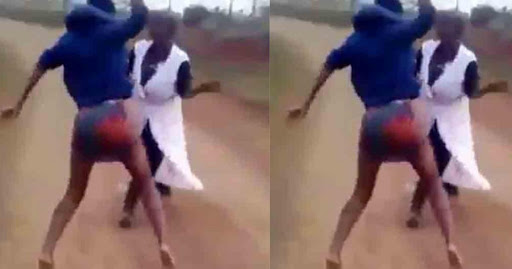 A disturbing video has emerged online which shows an angry young lady flogging a woman said to be her mother in public with a cane.

According to reports, the lady’s pastor had told her that her mother is a witch and she is responsible for all her predicaments including failed relationships.

Having heard the so-called revelation, the lady though the most prudent option for her was to assault her mother in public as the video portrays her doing.

A social media user identified as Sam Ituama shared the video online and it has since gone viral with many people expressing disgust at the lady’s conduct.

“This girl is beating up her mother while her friends videotaped and giggled because her pastor tagged her a witch!

“Where is this world going?

“#AfricanProphets have a way of rubbishing families,”Sam Itauma captioned the video.

It is not clear if flogging her mother was part of the directions given her by the pastor to salvage her predicaments.

The helpless mother could be seen fruitlessly attempting to save herself from her daughter’s attack.